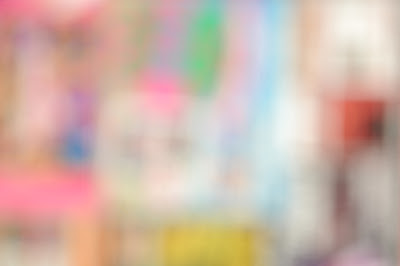 Palazzo di Colori, 2011
Palazzo di Colori, 2011, was captured in Nolita, New York City, while on tour for my first exhibition.  Like all of my work, I shoot within a single frame (no montaging or multiple exposure) and my work undergoes no afterwork.  Once the shutter closes, my work is done.

Palazzo di Colori (Palace of Colours) is a continuation on my fascination with light, colour and movement, loosely connected or suspended together in a somewhat abstract fashion, which allows us to reflect on this scene from a completely new visual dimension.

I roam the streets, mostly with my eyes out of focus, searching for first impressions that strike me with extraordinary moments of light and colour.  Once I find my colour palette, I then study it until it speaks to me.  There's barely any logical thought process involved.  I let myself go to emotionally connect with the colours and shapes being created.  Sometimes this happens instantly, but sometimes it takes a while to find the true story I want to tell.  Sometimes it doesn't work at all, and so I move on.

I love working with the camera loosely, using non-traditional, self-taught techniques, allowing colours to mix and intertwine and create new visual dimensions.  These days, I rarely use a tripod.  In fact, I find a tripod quite restricting (like crutches).  I connect with my camera like a painter to their brush, or a musician to their instrument.  It's an extension of myself that moves and flows emotionally with me, capturing the real energy from the scene in front of me, not in a split second, but within a passage of time. 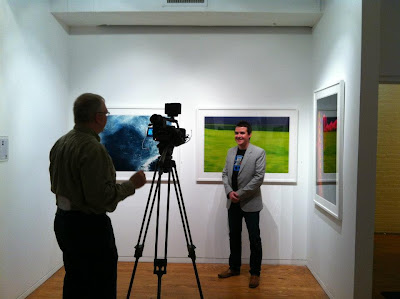 If there was one place in the world every artist dreams of kicking off their international art career, New York City is it!  Ten months ago, that is exactly what happened...
Leading contemporary art gallery, Agora Gallery, is situated in the heart of Chelsea, New York's distinguished art district.  In February this year, the gallery contacted me via email to offer what would become the chance of a lifetime... professional gallery representation in New York City!  At first, I thought someone was playing a practical joke on me, but I soon discovered this offer was very real.
Some ten months later, after weekly emails with the gallery staff, I was winging my way to New York for the launch of my first group international exhibition, Altered States of Reality, which officially opened on Thursday, 3 November 2011.
I was lucky to be able to be there to celebrate it with my family and meet some incredible artists.  We had a great turnout on opening night and the Agora Gallery Team are incredibly professional, curteous and supportive of all of their artists.  Better still, they cross every 't' and dotted every 'i', ensuring the exhibition was a seamless success.
It was great to meet the gallery team after all these months of emails and spend some valuable time with Gallery Director, Angela di Bello, who knows the NY art scene exceptionally well and has given me some excellent advice for the future.  I look forward to what the future holds with Agora Gallery and New York City!
Here are some more images from opening night...

The snow blizzard had cleared, just in time for a great opening turnout! 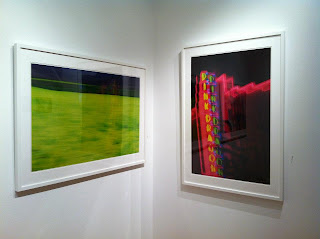 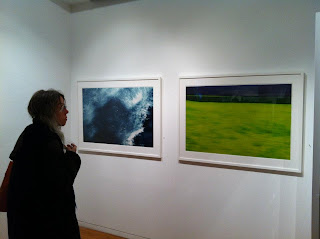 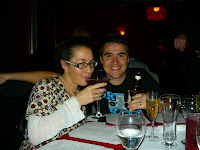 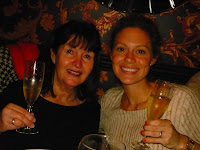 (From left to right) So lucky to celebrate the opening at dinner downtown NY
with my supportive family - sister Hollie, my mum Lynne and lovely wife, Kelly 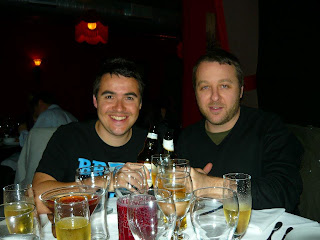 Scott Pioro from Aussie rock band, Goodbye Motel,
stopped past for the opening and post celebrations! 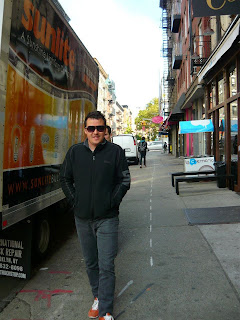 Enjoying a relaxing walk in downtown Nolita NYC, the morning after opening night
Posted by info at 17:28 No comments:

I have been selected to exhibit in a photography exhibition in the heart of ’s art precinct in November. 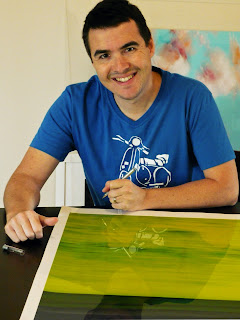 is a long way from home, but that’s not stopping me heading to the Big Apple for an exhibition in ’s district. My work was chosen, along with nine other artists from around the world, for the Altered States of Reality Exhibition, which will be on from 2 - 23 November.
Agora Gallery, NYC, first noticed my work through a previous Danks Street Complex in Waterloo.  “Cade’s limited edition photographic prints provide a refreshing view of the most basic elements of optical experience,” says Angela di Bello, Director, City.  “Inspired by the ‘visual freedom’ of the Impressionist school, Cade’s graphic experimentation or ‘painting’ with light, colour and movement results in stunning photographic abstractions that push at the stubborn edge of traditional photography,” she said.
I leave for at the end of the month. For more information on the exhibition, see my News & Events page on my website at: http://www.cadeturner.com.au/news.php
Posted by info at 18:36 No comments: 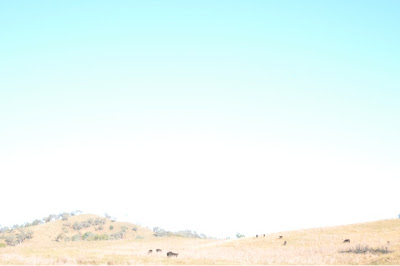 Sunburnt Country IV, 2011, by Cade Turner
Sunburnt Country is a new four-piece series shot in Scone, NSW Australia.  I really wanted this series to reflect the rural Australian landscape through a fresh, Impressionist style.
Scone's countryside is quite dry and it can be challenging to find the right elements to work with that will produce a striking result.  I found by overexposing, I was able to achieve my colour palette, and by framing the large sky in the top four fifths of the frame, I was able to accentuate the enormity and dynamicism of the sky, in contrast to the minimal specks of the trees and cows.  The use of movement allowed me to erase and painterly blend some detail of the cows, trees and grass, which helps emphasise the huge sky.
In the three other works of the series (below), I pushed the exposure even further.  I wanted to push the scene's raw elements to their very edge, without losing context.  The series was shot completely in camera, single frame, with no montaging or afterwork.
Enjoy!

I was pleased to finally get a break from the city and head into the country at Easter to capture some new works.  Since I was eight, my father and I have been camping on a beautiful property in Scone, known as Belltrees (4 hours north-west of Sydney).  The Belltrees property has been owned by the White family since 1831.  My father has actually been camping on this property since he was 17, through a school friend.

I have called this particular series Renaissance de la nature (Rebirth of Nature).  I spent an entire afternoon down by the Hunter River which flows through the centre of the property.  I loved the blades of the last moments of sunlight which pierced through the trees, highlighting fine sections of the swirling water.

When you sit by the flowing stream up close for some time, each moment seems to flow right into the next.  I wanted to get in between these moments, each twist and collision of water that was occurring in front of me.  I really wanted to use movement and long exposures to help me stretch time and portray the incredible beauty and dynamicism of these extraordinary moments, which are individually unique, yet impossible for the eye to see, let alone process.  I feel that each of these glimpses allows us observe the constant life cycle of nature at its minute level.
Posted by info at 17:53 No comments:

Where did my creative journey begin?

I have always felt a strong, emotional connection with light, shapes and colour.  But, although I was good at drawing and painting, it just didn't happen.
In fact, my first artistic phase came through music, when I joined my primary school choir at the age of ten.  As soon as I had my first session, I was eager to learn the piano. I  borrowed a mate's miniature, single-octave keyboard and taught myself to read and play all the songs in our choir book.  This was the tipping point that convinced my parents to invest in a piano.
My piano was an old, WWII German up-right.  But to me, it was  just awesome to have 88 full-size keys! Within a few months, right before my 11th birthday, I had completed my first composition, which I called Mysterious Anonymous.  Twenty three years on and some twenty compositions later, Mysterious Anonymous remains my favourite written piece.
Music was my life for ten years until my 21st birthday when my grandparents bought me my first Nikon 35mm camera.  This marked the beginning of my second phase: Art photography.
For the past 12 years, I have dedicated my creative energy to art photography (film and digital) and have taught myself some unique, non-conventional techniques which have shaped and continue to shape out a certain contemplative focus on mood in my work.
Today, I find myself more inspired by painters, particularly the great Impressionists.  For the past two years, I have been exploring Impressionism through the lens (also known as Pictorialism), which I will discuss further in other posts. 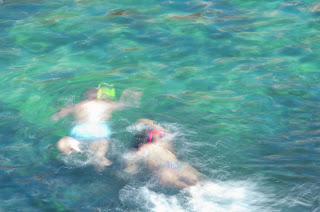 I feel I will soon approach the third phase in my art journey - where my music and photography finally come together... more on this shortly!
Posted by info at 16:54 1 comment:

Hello and welcome to my blog!
I really wanted to establish this blog so people can scratch the surface and learn more about me, my creative journey as an artist, and what inspires and drives me to create my work.
Please feel free to engage with and become part of this blog at any time.  I encourage you to post your comments and feedback, or just sit back and enjoy the odd post every now and again ;)
Also, if there's something you'd like to hear more of, just ask and I am happy to respond!
Cheers,
Cade
Posted by info at 15:51 No comments: