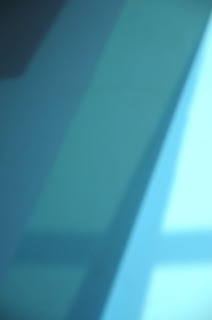 La Piscina (The Pool) (2012) was captured at Collaroy Rock Pool last November at the break of day.  As with all of my work, these have been captured completely in-camera (no post-production work).

As a series of two works, it is the latest from my oldest style, Intermission, developed from 1998.  It originates from my fascination for searching for hidden scenes during mid afternoon, away from the action, while life is perceivably happening somewhere else or at other points in time.  For me, this is a golden time when light casts vibrant colour and angled shadows, bringing a new and mysterious mood, sense of meaning and significance to particularly insignificant ‘moments in between’.

Intermission is largely influenced by American Realist, Edward Hopper (1882-1967), Australian artist,  Jeffrey Smart (born 1921), and UK-based album artist and designer, Storm Thorgeson (born 1944) who is known for Pink Floyd's iconic album covers, including Dark Side of the Moon (1973).
Posted by info at 09:44 No comments: